Funky piper, electric violinist, whistler and composer auditioned for The Music School way back in the 1980s. Stunning the panel with his bagpipe playing even though he could not read or write a note of music, Martyn was warmly welcomed and his unique creative talent developed quickly along with his interest and love of Scottish music. After his time at The Music School, he studied at The Royal Scottish Academy of Music and Drama in Glasgow.

Martyn's music, as described in The Scotsman, has 'Gaelic roots but also draws inspiration from the music of many cultures and the resulting sound can take in everything from ceilidh music and Afro-Islamic grooves to dub, jungle, jazz and trip-hop music.' His interest in world music was constantly stimulated by extensive travel and playing in major folk festivals around the globe.

Martyn often took time out of his busy schedule to give workshops at the Music School and was commissioned to write Mackay's Memoirs for the Music School Chamber Orchestra to play at the opening of the New Scottish Parliament in Princes Street Gardens. After several other performances (including the opening of the 2004 National Mod) the piece was recorded and the CD is available from the School and local record shops.

An international jazz saxophonist originally from Wester Hailes, Edinburgh. After studying with us here at The Music School, Tommy received a scholarship to the prestigious Berklee College in Boston, USA. With his unique style of solo playing, he soon attracted the attention of such jazz greats as Chick Corea and Gary Burton and later embarked on several world tours. Television, radio and many magazine articles followed and then the first record deal arrived with the famous Blue Note label. The albums Step by Step, Peeping Tom, Standards and Paris were released to great acclaim and he is currently signed to Linn Records.

Tommy is also a composer of distinction. In 1990 he was commissioned by The Scottish Ensemble to write his first saxophone concerto and later a suite for sax and strings. Classical music continues to influence much of his music. Recently Tommy took a new direction, however, for a project-based album with Linn Records entitled Beasts of Scotland. Commissioned by the Glasgow international Jazz Festival this idea was inspired by Edwin Morgan's poems and a series of paintings by Scottish artist Neil Bryce.

Tommy has returned to The City of Edinburgh Music School to share his expertise with current music students with a keen interest in jazz and several of our students play in his Youth Jazz Orchestra.

Lisa attended the Music School 1984-1990.  After studying music at the University of York, she went on to a highly successful twenty-year mdia career, including as a producer at Classic FM, MD of a local radio group and Director of Strategy for the industry body.  She then ran her own strategy company, cinsulting across a wide range of sectors, including transport, health, technology and the arts.

Her distinguished non-executive career includes seven years as Vice Chair of Scottish Opera.  In 2016, Lisa was appointed as the first female principal of Gordounstoun, the world leader in character education, wich recently published research with the University of Edinburgh into the lifelong value of out-of-classroom learning experiences, and which counts HRH the Duke of Edinburgh, Olympian Heather Stanning and author WIlliam Boyd amongst its alumni.

"I came from The National School of Music in Mexico City. I heard about The Music School when I flew across to a guitar course in Wales. 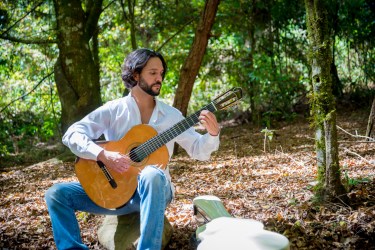 I studied classical and electric guitar, composition, music technology, piano and academic music. The City of Edinburgh Music School was an important experience in my life - I had to leave my country and adapt to a different culture.  But thanks to the help and support from my teachers and other students, I felt I settled in and took every opportunity to become the best musician possible. "

Born in Mexico City in 1979, Morgan Szymanski started playing the guitar at the age of six. Early studies at the National Music School (Mexico) and the Edinburgh Music School led to a scholarship to study under Carlos Bonell and Gary Ryan at the Royal College of Music (RCM) in London, graduating in 2004 with first class honours. During his studies he won all guitar prizes from the RCM as well as scholarships from the Tillett Trust, Countess of Munster Musical Trust, Leverhulme Trust, Wall Trust, FONCA and a scholarship to study at the Conservatorium van Amsterdam. He immediately went on to become the first solo guitarist to be selected by the Young Classical Artist Trust and was the first guitarist to be awarded a Junior Fellowship at the RCM, where he completed his Masters with distinction.

Described by one critic as “a phenomenal harp player who can make her instrument ring with unparalleled purity”, Maeve Gilchrist has taken the Celtic harp to new levels of performance.

Born and raised in Edinburgh, Scotland, and currently based in Brooklyn, New York, Maeve‘s innovative approach to her instrument stretches its harmonic limits and improvisational possibilities.

She tours internationally as a band leader as well as maintaining a number of collaborations including a duo project with percussive dancer Nic Gareiss, a more electronics based project with Viktor Krauss and as a member of the Irish network commissioned ‘Edges of Light’ quartet.

Maeve has appeared at such major music events as Celtic Connections in Glasgow, Tanglewood Jazz festival and the World Harp Congress in Amsterdam. She has released five albums to date, including her most recent recording Vignette, on Adventure Records, with Nashville legend Viktor Krauss, while on her own label her solo Ostinato Project is a beguiling exploration of the possibilities of her instrument.

Maeve was the first lever harpist to join the faculty of the iconic Berklee College of Music in Boston, where she taught for five years before switching to a visiting roots department artist this spring. She has written several instructional books published by Hal Leonard Music. Also an in-demand composer and arranger; this year, Maeve premiered her first concerto for lever harp and symphony orchestra and is currently working on a number of commissions including a string quartet for Irish harp and string quartet. 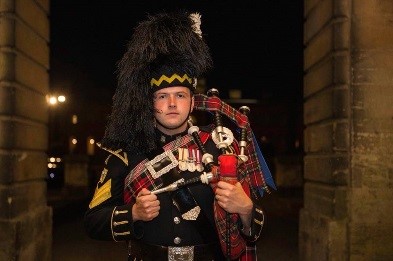 Pipe Major Ben Duncan of The Royal Scots Dragoon Guards is one of the Army’s leading pipers. Born in Edinburgh, Ben started playing at the age of 4 receiving tuition from Donald McBride and Harry McNulty. At the age of 10 he auditioned for the City of Edinburgh Music School where he began long term instruction from Andrew Wright.

In 2007 Ben joined The Royal Scots Dragoon Guards as a piper and Main Battle Tank Crewman where he has served on operations in Iraq and Afghanistan. In 2008 Ben was part of the Classical Brit Award Winning Album “Spirit of the Glen, Journey” which topped the Classical charts for 14 weeks gaining the award, ”NS&I Album of the Year”.

Ben is a Premier graded player with a large track record of solo piping prizes including Highlands & Islands Young Piper of the Year 2017, two Lochaber Gold Medals, Winner of the Pipe Majors’ Wheel of Fortune Invitational, Champion Piper at numerous highland games including the Braemar Gathering, Northern Meeting Piping Competition in 2017 and the A Grade Strathspey & Reel at the Argyllshire Gathering in 2018.

Throughout his career Ben has performed all over the world at various events including on a two-month tour of Australia and at international military tattoos. He also performed at Sting’s 60th Birthday party in New York and at various State Royal events including at the Queen’s 90th Birthday and most recently for the visit of the US President, Donald Trump, at Blenheim Palace.