On Monday 4th March, the City of Edinburgh Music School held its 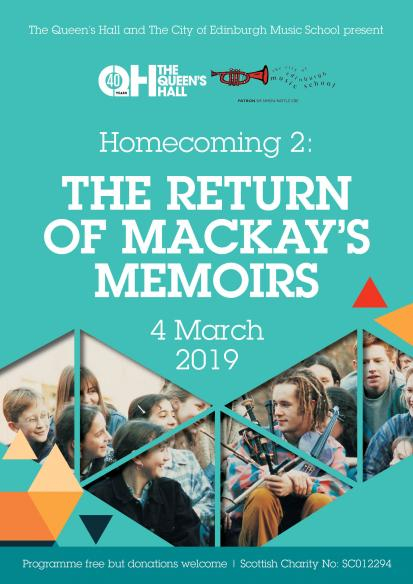 second Homecoming concert in Edinburgh’s iconic Queen’s Hall, celebrating students past and present in a joyful showcase of musical skill and performing prowess.

CoEMS musicians from Broughton and Flora’s wowed a packed house with solo and ensemble numbers, culminating in a memorable performance of Mackay's Memoirs, Martyn Bennett’s powerful and moving final work: commissioned for the centenary of Broughton High School, written specifically for his fellow CoEMS co-students and then performed as part of the celebrations for the opening of the Scottish Parliament on July 1st 1999.

The whole evening was compèred by Lisa Kerr, a contemporary of Martyn Bennett’s at the Music School and now Principal of Gordonstoun.