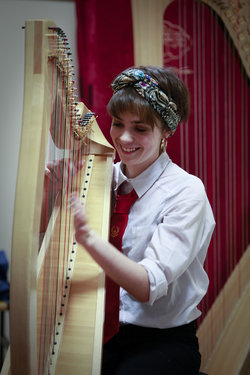 Anna joined the Music School in Primary 5 at the age of 9. She originally auditioned on piano and violin but switched from violin to clarsach soon after. In S1 she started vocal lessons and in S5 started working with music technology and recording. Anna left the Music School in June 2014 with Baccalaureat in Expressive Arts (distinction), Advanced Highers in Music, Art and English and 5 A Grades at SQA Higher. She also passed Grade 8 Clarsach, Piano and Voice.

Anna was a finalist in the BBC programme ‘The Voice’ and the YouTube video of her singing ‘Get Lucky’ has had over 10 million hits so far.

Click here to view Anna performing on The Voice.

'She can bring Beauty to anything’ - Ricky Wilson (Kaiser Chiefs)

Anna McLuckie is a nineteen year old singer- harpist. Having grown up in Edinburgh, Anna went on to study vocals at The Royal Northern College of Music. Influenced by alternative folk and indie rock music, her sound has been described as "hauntingly beautiful" and "utterly captivating".

Anna has performed at venues such as King Tuts, O2 Academy (Glagsow, Newcastle and Leeds) and The Queen’s Hall. Alongside this she has also played at Wilderness, Brownstock and Speyfest festival alongside artists such as Bjork, Ben Howard and Darkness. She has recorded and mixed original material at Universal studios in London for DECCA.

“Her performance on the Clarsach in the Japanese Garden that day was quite beautiful and it’s amazing to think she has The Voice to match!” - Edinburgh Lord Provost